24 Nov SInterKlaas is Coming to Town 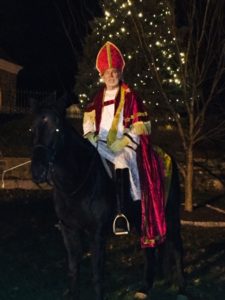 ...and lo, the good St. Nicholas came riding over the tops of the trees in that selfsame wagon wherein he brings his yearly presents to children...

— Washington Irving, The History of New York from the Beginning of Time to the End of the Dutch Dynasty

As the seasons change at the Old Dutch Church, we leave the characters of the Legend tucked away for the winter and our attention moves to a season more in keeping with the purpose of this place – Advent. And this calls to mind the story of Sinterklaas, familiar to the Dutch, but until the early 19th century, largely unknown to the rest of America. For nestled amongst the pages of Washington Irving’s 1809 satirical work, “A History of New York”, is America’s first glimpse of the Dutch St Nicholas, whom the author claims rides over tree-tops with his toy-laden wagon, and “rattles down chimneys” with his presents for children and who can be found smoking a long clay pipe by the fireside. Sound familiar?

Something was in the air in the early 19th century. Washington Irving started the ball rolling with his “History” which was published on St Nicholas Day, Dec 6, 1809 and (perhaps tongue-in-cheek) dedicated to the New York Historical Society. In his fictional account of the history of New York “from the beginning of time to the end of the Dutch dynasty ” he resurrects a saint that shares a name with St Nicholas, but takes on other attributes that over time will become associated with the contemporary Santa Claus. In 1810, the founder of the New York Historical Society, John Pintard, a Huguenot who personally celebrated the feast of St Nicholas, published a pamphlet proposing St Nicholas as the patron saint of New York as well as the patron saint of the historical society. Pintard was the kind of man who could impress his vision of St Nicholas on others. He already had a long history of influencing culture:

In the immediate post-Revolutionary era, he led innumerable new movements: in the Marine Society; in founding the historical societies of this country, starting with Massachusetts; in the first insurance company, the first savings bank; in the American Bible Society, and the General Theological Seminary; in the New York Common Council and in the State Assembly; in the Louisiana Purchase and the Erie Canal. He was a great patriot and a staunch Jeffersonian. 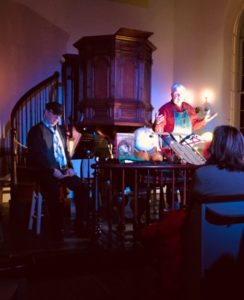 An associate of both Irving and Pintard, no doubt influenced by the growing interest in St Nicholas, painted the indelible image of the saint that has endured in the American imagination. The theologian Clement Clarke Moore, a friend of Irving and teacher at the General Theological Seminary penned a poem for his children in 1822 – “A Visit From St Nicholas”. Published anonymously a year later, and often referred to as “‘Twas the Night Before Christmas”, this poem moves the saint’s visitation from his feast day to Christmas Eve. While Irving’s flying cart becomes a sleigh pulled by eight reindeer, the gift-giving, sliding down chimneys, stocking filling, pipe-smoking character in Moore’s poem surely recalls Irving’s earlier work.

At the Old Dutch Church we celebrate St Nicholas Day on his feast day with story-telling and carols, tree-lighting, hot apple-cider, traditional Dutch cookies, and a visit from the Saint himself on horseback. In the deep darkness that surrounds the church, and the still silence that blankets the burying ground, we light the candles, stoke the 200 year old box stove, and wait in expectation of Christmas.

Daughter of a hula dancer and WWII vet. Born and raised on the East Coast and brought up by my Hawaiian grandmother. Mother of 2 married daughters and wife of a guy who still keeps me laughing after 38 years of marriage. Tutu to a lovely grandson! Docent at the Old Dutch Church of Sleepy Hollow - think Legend. Member of the Reformed Church of the Tarrytowns