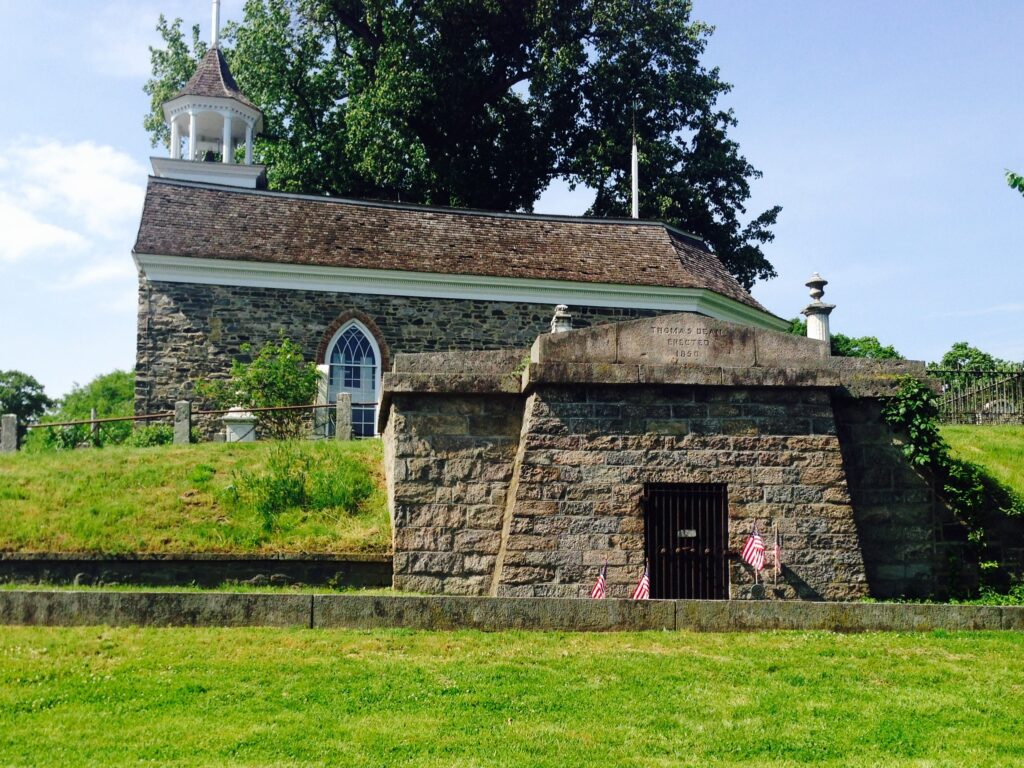 One of the things that surprises most visitors today is that the Old Dutch Church is still functioning in the capacity for which it was built – as a house of worship. Our current membership isn’t far off from the number that Dirck Storms recorded in the First Church Register (1697-1715). Between his day and ours, the membership has grown and contracted. In its growing phase a new “South Church” was built a mile south in Tarrytown in 1837. Both churches were served by a single pastor. In 1851, an additional church was erected in between the Old Dutch and South Church and the congregations split, each with its own pastor. The new church became the First Reformed Church and included the Old Dutch in their holdings. South Church became the Second Reformed Church. While this construction was going on, new houses of worship cropped up for the other denominations, reflecting the changing demographics of the Tarrytowns. By the 1990’s, the memberships of the First and Second Reformed Churches were in decline. Changing attitudes about religion, as well as death and migration laid the way for the reunification of the churches as the Reformed Church of the Tarrytowns. Throughout all of these changes, our little church, the Old Dutch, remained, anchoring us to our place in history and providing a backdrop for our local Legend.

As we approach the July 4th celebration in a year marked by deep political and cultural division in our nation, it would do well to think back to the days following the Declaration of Independence and how that announcement brought colonial Philipsburg into a state of civil war. The following November, 1776, Lord Frederick Philipse III joined 546 other loyalists from New York and the surrounding areas, signing a Declaration of Dependence reaffirming their loyalty to the crown and sealing their fate at traitors in the eyes of the new government. It’s ironic that this signing took place in Fraunces Tavern, the same place Gen. Washington would deliver his farewell address to the Continental Army after the British evacuated New York seven years later in 1883. 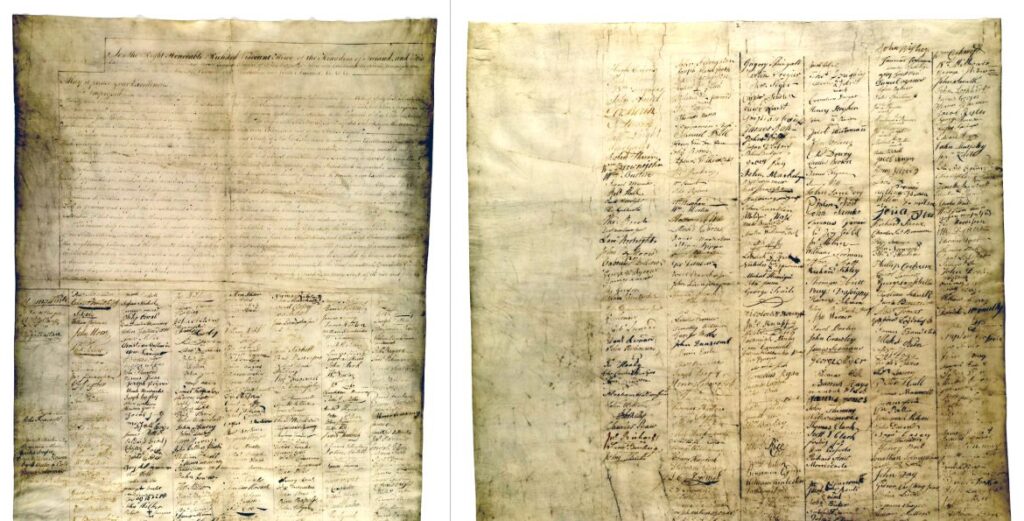 Declaration of Dependence 1776. Frederick Philipse I signature is in the middle of the 5th paragraph. The original document is at the New York Historical Society. Source: https://allthingsliberty.com/2018/12/the-loyalist-declaration-of-dependence-of-1776/

During the Revolution the doors of the Old Dutch Church were kept shut as tenant farmers struggled to keep their farms going while at the same time facing the dangers of cowboys, Hessian troopers, and loyalist neighbors, not to mention the constant threat of death, imprisonment and starvation. The Soldier’s Monument in Sleepy Hollow Cemetery and the headstones in the Burying Ground memorialize the families who served in the militia and faced the hard task of rebuilding the area after the war’s end including the Martlings, Buckouts and Romers.

July 1, 1781 marks that day that General Washington led the Continental Army down Route 9 from Peekskill on the way to rendevous with General Rochambeau, stopping to rest the troops in the church burying ground long enough for him to make a note of it in his diary. Perhaps someone opened the door of the church for him to get out of the glaring sun while his soldiers napped in the grass under the trees.

It’s easy to look out the window at the rows of headstones with a sense of nostalgia, and long for a time when the enemy seemed easy to recognise and the battle, just. But for those who lived through it, the enemy could easily be a neighbor once cherished, and battles, even though just, tore up the land and families as well. But our little church reopened, unscathed by the skirmishes that surrounded it. I often wonder if the British left it alone because it was part of the property of a loyalist Lord, and as for the the patriot farmers, the Old Dutch was their ancestral place of worship. Whatever the reason for its survival, the New York Commissioners of Forfeitures deeded the Old Dutch Church to the minster, elders and deacons for 20 shillings. Babies were once again baptized, confessions of faith heard, and marriages witnessed. The last Lord of the Manor and the loyalist members of his family sailed to England, Tarrytown survived, and Washington Irving was born to retell the stories of Neutral Ground in his own fashion in “Wolfert’s Roost and Miscellanies”:

“In a little while, this debateable land was overrun by predatory bands from either side; sacking hen-roosts, plundering farm-houses, and driving off cattle. Hence arose those two great orders of border chivalry, the Skinners and the Cowboys, famous in the heroic annals of Westchester county. The former fought, or rather marauded, under the American, the latter under the British banner; but both, in the hurry of their military ardor, were apt to err on the safe side, and rob friend as well as foe. Neither of them stopped to ask the politics of horse or cow, which they drove into captivity; nor, when they wrung the neck of a rooster, did they trouble their heads to ascertain whether he were crowing for Congress or King George.”

During the 200th Anniversary of the Church in 1897 church historian, the Reverend David Cole, D.D. gave the historical address in which he recounted the contributions of all of the ministers who have served the church. I can picture him looking out the windows of the Old Dutch when he spoke these words:

“There may be people who do not feel the spell of the history of this house, this cemetery, this congregation, but some of us do feel with deep emotion that within a few feet of us the moldering ashes of the founders of this church….We do feel the charm of the hundreds of precious names engaven on the stones that stand close up to these walls, within the limits of this old churchyard. We bring before us the days gone by when these now blessed ones sat before this pulpit, and listened to the words of life, as spoken by the pastors who are with them now upon the other side. The story of the early fathers, the record of the early struggles, the magic of the old names, the thought of the sacrifice and heroism and the work of men and women now all gone across the line, in these is the spell that brought us together.”

Looking into the burying ground from inside the Old Dutch.

Daughter of a hula dancer and WWII vet. Born and raised on the East Coast and brought up by my Hawaiian grandmother. Mother of 2 married daughters and wife of a guy who still keeps me laughing after 38 years of marriage. Tutu to a lovely grandson! Docent at the Old Dutch Church of Sleepy Hollow - think Legend. Member of the Reformed Church of the Tarrytowns