22 Nov A Headstone for a Patriot, Centuries in the Making

When is a witch not a witch? 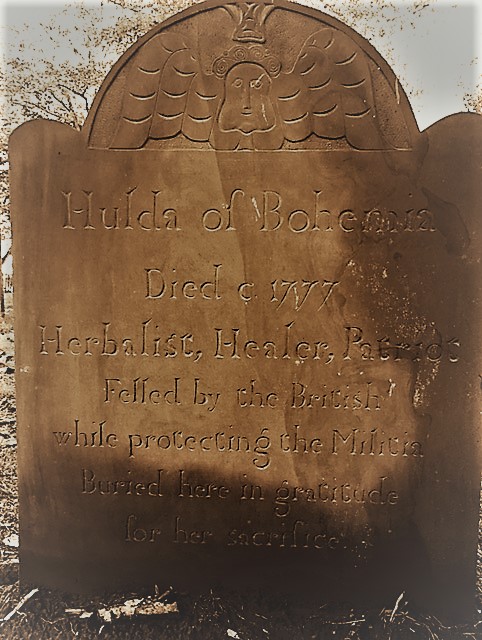 On Reformation Sunday, Oct 27th, Rev. Jeff Gargano recalled the persecution of Hulda of Bohemia and dedicated the memorial marker that now binds her story to the story of The Old Dutch Church. As head docent of the church and burying ground, I was asked to offer a remembrance during the service.

As with the saints of old, there is often a thin line between legend and history. The removal of St Christopher from the Catholic liturgical calendar because of historical questions did not stop the veneration of person who is widely regarded as the saint of travelers.

Here in Sleepy Hollow we are very much aware of that spot that we occupy between legend and history as we finish out a month long celebration of a story that not only brings tens of thousands of people to our twin villages, but also much needed revenue to keep our historic sites and their missions in good fiscal health.

And the story of Mother Hulda is one of those stories that could have long been relegated to legend. Like our prominent author, Washington Irving,  we could remember her as the High German doctor who bewitched this hollow and “cast a drowsy, dreamy influence over the land”.

But she was a very real person who faced the perennial struggle of one who is regarded as a stranger in a place and time that was very suspicious of strangers. The American Revolution brought division and devastation to this place called Neutral Ground. Divided loyalties tested neighbors and spies where everywhere. The families whose great-grandfathers responded to Frederick Philipse’s invitation to come and farm all knew each other. Their sons and daughters married into each other’s families. So into this very close-knit community comes Hulda of Bohemia. A single woman of German background who lived alone in a little hut near Spook rock in what is now the Rockefeller State Preserve. She was known as a weaver of baskets and one who practiced the healing arts which she may have learned from Native Americans. She was odd enough in appearance and countenance to raise an alarm for the minister of the church who decided she must be evil – a witch. The congregation was instructed to stay clear of her. And while the community shunned Hulda, she did not shun the community. She continued to make her remedies and leave them in baskets at the doorsteps of homes where sickness was present. Now Hulda was also somewhat of a sharpshooter. She wanted to join the line is those skirmishes between the militia and British but first of all, this was not woman’s work and secondly,  well, she was a witch. So the men kept her at a distance. However, in one incident when patriot men were in a precarious situation she came to the rescue. Edgar Mayhew Bacon in his Chronicles of Tarrytown and Sleepy Hollow says this:

At last one day a force of British landed from one of the transports that had sailed up the Hudson and commenced a march which was to bring them, by means of the King’s highway to the rear of Putnam’s position at Peekskill. As they marched in imposing array a volley greeted them from behind walls and tree-trunks….Not to be repulsed this time, Hulda fought with her neighbors, using her rifle with great effect, so that she was singled out for vengeance; and before the redcoats retreated to their boats they had…overtaken and killed the witch.

Hulda’s body was carried to her cabin where a Bible was found by her bed and in it a will leaving a small store of gold to the widows who lost their husbands in the war.

The community realized they may have been wrong about Hulda and her actions of that day earned her a Christian burial in an unmarked grave here along the North Wall of the church.

For many years we had an orange flag sticking up out of the ground to designate the burial place of Hulda. And when we told her story we’d stand around that flag. Some people would come looking for the witch, especially at this time of the year, and those of us who knew her history felt it was important to give her proper recognition as a patriot. So the consistory agreed it was time to give her a proper stone and the master carver, Robert Carpenter, who has done restoration work for us in the burying ground and who also carved the screens that cover the pipes of our organ agreed to carve a colonial style headstone for Hulda. So now, just on the other side of this wall we have a proper memorial, for a real woman –

Hulda of Bohemia
Died c 1777
Herbalist, Healer, Patriot
Felled by British
while protecting the Militia
Buried here in gratitude
for her sacrifice

Many believe that Washington Irving‘s reference to the High German doctor pertains to Hulda. Some believe that Hulda spent time living among Native Americans and that is where she learned about the healing properties of local plants. Spook Rock has its own story. Witches were not burned in Sleepy Hollow, this is not Salem. Hulda’s headstone is carved in the style of in the style of John Zuricher, a prolific stone carver in the mid-18th whose work can be found in numerous burying grounds crossing all denominations. It was decided that Hulda’s memorial should be in the style of her day. The soul effigy is a colonial symbol that the soul has ascended to heaven.

Hulda’s headstone was funded through the generosity of The Friends of the Old Dutch Church & Burying Ground which provided $5,600 for the creation of the marker. Since it was founded in 1985, the Friends’ support of restorations and building projects at the Old Dutch easily approach, if not exceed $500,000.

The Reformed Church of the Tarrytowns are the caretakers of The Old Dutch Church and Burying Ground.

Daughter of a hula dancer and WWII vet. Born and raised on the East Coast and brought up by my Hawaiian grandmother. Mother of 2 married daughters and wife of a guy who still keeps me laughing after 37 years of marriage. Tutu to a lovely grandson! Docent at the Old Dutch Church and member of the Reformed Church of the Tarrytowns.