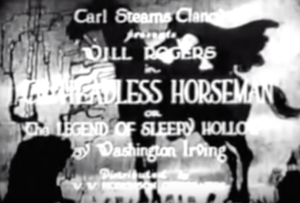 The 1922 silent film “The Headless Horseman, or The Legend of Sleepy Hollow”, starring Will Rogers as Ichabod Crane, will be shown inside the Old Dutch Church, Wednesday evenings from now until the end of October.  The show begins at 5:30pm, and tickets are $15.

Many scenes in the movie were actually shot inside and outside our church, adding a sense of realism and mystery to the show.  Yes, you are inside the actual building, where Ichabod led his choir and where Brom Bones dreamed up his dastardly deeds!

RCT’s resident mechanical magician Jim Donovan conceived of and built the enormous removable screen that itself makes a dramatic entrance at the beginning of the film!  Jim Keyes accompanies the film live on the Old Dutch Noack tracker organ, adding spice, terror, comedy and dramatic effect with his music.

For more information, contact the church office at 914-631-4497, or office@reformedchurchtarrytowns.org.